Eastman Kodak Co. replaced its chief financial officer and moved to cut another 1,000 jobs in an effort to slow its consumption of cash and better position the company to emerge from bankruptcy court.

The moves follow a sharp increase in cash use in July and a stumbling patent auction that looks unlikely to raise as much money as the company had hoped. Those developments threaten to make it harder for Kodak to emerge from Chapter 11 in its new incarnation as a printer maker, forcing the company to consider new asset sales to raise funds.

Cash held by Kodak's U.S. operations fell by $72 million in July, the most recent figure available, compared with cash burn of $64 million in June and $43 million in May. Creditors responded by putting more pressure on the company to cut costs, according to creditors familiar with the matter. Many called for management changes, specifically for Chief Executive Antonio Perez and Chief Financial Officer Antoinette P. McCorvey to resign, the creditors said.

On Monday, Kodak said Ms. McCorvey would be leaving the company. Rebecca Roof of AlixPartners LLC, a restructuring advisory firm hired by Kodak, was named interim CFO.
A spokesman for Kodak declined to comment on calls for Mr. Perez to step down.
Under the reorganization laid out Monday, Kodak will remove some layers of its executive ranks. Co-President Philip J. Faraci will leave the company and won't be replaced. Mr. Faraci worked with Mr. Perez at Hewlett-Packard Co. HPQ +0.82% prior to joining Kodak and was largely viewed as the CEO's right-hand man.

Laura Quatela, Kodak's other president, will lead the personalized imaging unit. Dolores Kruchten, who was general manager for business solutions and services, will head the company's document imaging business. Both are expected to leave the company after those businesses are sold in the first half of 2013.

The latest round of layoffs adds to the 2,700 jobs cut so far this year, leaving about 13,400 workers at a company that once employed 145,000. Kodak said it expects to save about $330 million a year from the head-count reductions, including costs for compensation and benefits.
The company said it is considering further layoffs.

The savings are needed in part, because Kodak's efforts to raise cash by selling off some 1,100 digital patents aren't on track to be as lucrative as hoped. Initial bids came in well below the $2.6 billion Kodak once said the patents could be worth, and the company, which had set a goal to finish the auction in early August, now says it will pick a winner Sept. 19.

Kodak's other unit after the reorganization will house the commercial businesses such as digital printing, graphics and services that the company intends to focus on after Chapter 11.

The company is shedding the film and camera businesses on which it build its name in favor of consumer inkjet printer and commercial printers, on which CEO Mr. Perez has long pinned the company's hopes for a turnaround.

Apr. 30, 2020 / PRZen / BOSTON & HELSINKI & JAKARTA, Indonesia & BUENOS AIRES, Argentina -- The Global Premedia Network (GPN), which continues to expand its international brand stewardship, is proud to announce Indonesian PT. Flexo Plate Digital and Argentinean Fotograbados Longo S.A. as its new strategic partners.  At this point, the GPN consists of eight independent and strategically connected companies aiming to establish mutually beneficial collaboration in order to provide superior packaging premedia services to their FMCG clients worldwide. "We are excited to join such a great group of forward-thinking companies. There is already a fantastic level of synergy between us and some of the GPN members and we are hoping to expand our collaboration with the rest of the network," stated Sebastian Longo, President and Managing Director of Argentinean based Fotograbados Longo S.A. Laura Wright, CEO of CSW, Inc., and Kai Lankinen, MARVACO's Chairman, agree 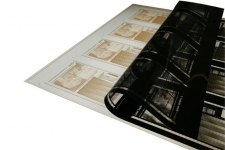 Flexo Plate Digital: Industry News New Dry Film for Flexo In cooperation with Swiss company Folex, a manufacturer of films and paper used in current imaging technologies, Flint Group Flexographic Products has developed a laser ablative dry film.  The laser ablative dry film, LADF, is designed for imaging on infrared laser systems, such as digital flexo or letterpress image setters. The imaged film can be used for the UV exposure of analogue flexographic, letterpress and offset plates, as well as for screen printing stencils and for image control. The new LAD film is claimed to offer numerous advantages to the user. Due to the very high resolution (>10.000 dpi, depending on the laser system) as well as the high contrast and the reproduction of even the finest details, it is suitable for almost all applications. The matte film surface enables the exposure of small size pad printing plates up to large size flexo printing plates. The thickness of 175 microns ensur

Jakarta, Indonesia – August 12, 2019 – Flexo Plate Digital, a leading flexographic repro house in Southeast Asia announced that it has installed the world’s first Sumitomo Riko AGW1067N, 4260 water washable processor, to promote greener initiatives to water-washable flexo plates. Flexo Plate Digital serves the premium packaging and labels industry in Southeast Asia, establishing itself as a leader in the manufacturing of high-quality flexographic printing plates while committed to introducing the latest innovation and technologies, working with suppliers engaged in delivering more environmentally friendly products and solutions. Flexo Plate Digital continues to use advanced technologies to create value for its customers by way of productivity and print quality.  This approach has led it to become the first Sumitomo Riko AGW1067N, 4260 water washable processor user in the flexographic market and a flagship plate-making partner in Southeast Asia. "We are very pleased with the